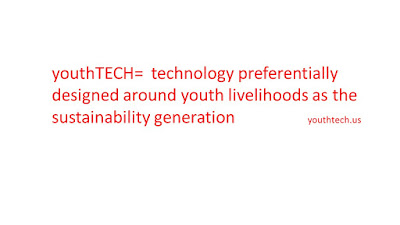 Who owns the media that youth create? and how do we change big media platforms run by people disinterested in youth as the sustainability generation? the apprenticeship of most superstars has nothing much to do with classroom education -

BR9 cf kenya ushahidi first big app helped youth prevent election riots - in university suburbs of beijing there is a resident local;police station every 1000 metres which also serves as community info center; one of koreas leading abilities is to build half million people new towns or new suburbs which are safest in world but at cost of zero public privacy outside- one of ways china is uniting african leadership is how future of g5 and mobile cameras designed into safety of cities

DO NATIONS youthTECH DEPEND ON OWNERSHIP OF ITS finTECH?
Muhammad Yunus once debated me the motion : Western big banking's credit card was the saddest invention of the 20th century. The once trusted local banking branch turned into something close to a loan shark and increasingly a debt trap which elders (and vested interest politics/media) chained their children to
CHINAS YOUTHTECH POSSIBILITIES ARE LIKE NOWHERE ELSE?
What fascinated me is china's youthTECH advantage arising from the fact that China's bricks and mortar banks never really launched the credit card market - so digital fintech (where the smartphone is used instead of a card) was first to create the market of why do people apply for credit
There are effectuvely only 2 players in China's fintech markets of digital cash and credit and loans- Alipay from Alibaba and we chat pay from Tencent. Here are several questions which can be intriguing to debate
Q1 Which system will sign up a larger membership base- Alibaba's whose permissions are connected with ecommerce or we chat whose permission come from membership of China's largest personal communication system. You might say round 1 to tencent as Chat's the larger membership population
Q2 what sort of data does each system collect which can be relevant to loans- round 2 to alibaba whose data is all about the supply chains of commerce and SME trustworthiness. Additionally China's broadcaster CGTN charged with investigative journalism of China's rejuvenation frequently talks about China's 4 greatest social innovations as being ecommerce digital cash fast trains and shared bicycles.
If these 2 questions start to explain what youthtech fintech movements will connect inside china, question 3 becomes how may each ecosystem empower international youthtech partnerships. I have tried to study alibaba for ten years now, so can only introduce its global youth tech advantages
First, Xi Jinping asked Jack Ma's Hangzhou to be the host of the China G20 in 2016 which happened at a unique time in the diaries of G20 and other world leaders summit. It was the first G20 to be convened 11 months after the UN had relaunched humanity's goals around 17 sustainability goals. Jack Ma spent a lot of those 11 months asking everyone he could on what they would help youth linkin round the new goals. He chaired the club of china's big business givers. He started to co-create popularity of the term 4th Industrial Revolution with the World Economic Forum's alumni, and has since started the worldwide research academy DAMO with 15 billion dollars exploring the future of technology's most human apps. He chaired the sme g20 homework . He came up with the idea of EWTP - why not use ecommerce platforms around the world so that smes can free trade without any of the trade wars nations apply to big businesses. He has made many speeches on why education is a far bigger tech and human challenge than finance in determining youth livelihoods and he aims to chnage who media celebrates for what by hosting the Olympics series that relay through Korea 2018, Tokyo 2020, Beijing 2022 Paris 2024, La 2028 If any technology leader tries harder (in both his favorite language Chinese and English) to collaboratively imagineer what youthtech possibilities the 17 sdgs stimulate then I would love to know who that is
DOES ANYWHERE ELSE ENJOY FINTECH OWNED TO SUPPORT YOUTHTECH
As far as i know only one other place stands out, Bangladesh where the leading fintech platform is owned by those who have since the birth of the nation to empower girls to end poverty.
In May 2018 Jack Ma started a partnership with Bangladesh's girls-inspired fintech.
Youyhtech SDG17 games on!
Posted by chris macrae at 7:15 AM