for blockchain university hall of fame we suggest youth vote for

br0 jack ma and anyone he or chinas poverty thinktanks chooses -

br6 don tapscott from toronto is obvious first choice in america- we wish we could get tim berners lee at mit to nominate someone but havent found out how yet- we sort of assume jerry yang is scouting for ma through stanford and west coast including alibaba's damo researchers at its 3 west coast offices
this leaves 9 other regions at www.bri.school

we know india and dubai are both doing heroic work- we assume in dubai the starting point is legatum who with mit and brac and ma and gates and mastercard foundation have been building the bank for the billion poorest women www.bkash.com 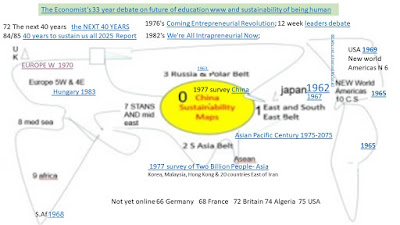 br0 br2 what else well amazing bangladesh and china started working even harder on ant finance/alipay, open sesame credit etc  and bkash- banking systems fir the owrkds poorest- by issuing mobile points instead of paper currency small enterprises savings could be ringfenced and kept out of reach of the big bankers who have so much been taken over by infertile haggard grandmothers pension needs that as pope francis told strasbourg you are ruing all youths futures - how could you bureaucrats do this? br6 br8 br10
Posted by chris macrae at 5:22 AM No comments:


The Theory Of Moral Sentiments was a real scientific breakthrough. It shows that our moral ideas and actions are a product of our very nature as social creatures. It argues that this social psychology is a better guide to moral action than is reason.

Extract: Chapter 0 from The Games and World Record Book of Jobs by chris.macrae@yahoo.co.uk


I am obsessed by valuing people’s family trees. Mine are choc full of Diaspora Scots. Going back 5 generations I can make a map of a majority of nations and societies we have networked with as missionaries, mediators and mathematicians. This worldwide connectivity is not unusual for Scots. In the early 1700s our nation failed, as a majority of people savings were lost in in international financial scam. The consequence was Scotland was colonized by London. By 1850, most Scots had needed to emigrate to find jobs. We sailed the seven seas or moved south across the border to England’s relatively warmer lands. It's not unusual for peoples from the far north to develop cooperative cultures on our own lands and to celebrate freedoms to explore cultures and trading opportunities North-East-West-South


In 1758, a professor at Glasgow University, by the name of Smith Adam, wrote a book on the search for Moral Sentiments. This advocated trust as the value multiplying hallmark of transparent market makers be those at local community levels or across a world of nations.

MODERATED BY
DISCUSSED BY
DOWNLOADS

Posted by chris macrae at 1:37 AM No comments: