Deming, innovated quality engineering systems with near zero defects. 1950s companies in USA did not offer him mch work so he located in Japan where his work helped Japan become world class -leading the world with bullet trains, microelectronics in the form of calculators and watches, systems like Toyota's
Posted by chris macrae at 1:18 PM No comments:

kennedy's moon race is remarkable because:
it demonstrated what human and computing intelligences could do that ha never been imaginable bepore
it dared to put 5000 of america's brightest brains onto achieving one goal- amazingly other opportunities that desperately need brains not silos of corporates, gov and ngos have never been repeated even though america has about 150 million working age peoples third only to india and china both of which have  over 5 times more

with the assassination of kennedy (as well as leading black americans a second kennedy and pop star lennon) and other shocks (the unwinnable vietnam war), the ever rising cold war with ussr, soon the changes in cost of oil that american culture had becomes 3 times more addicted to than anywhere , america turned from the nations whose optimism led the world to a much more neurotic place (fanned also by bad news media) 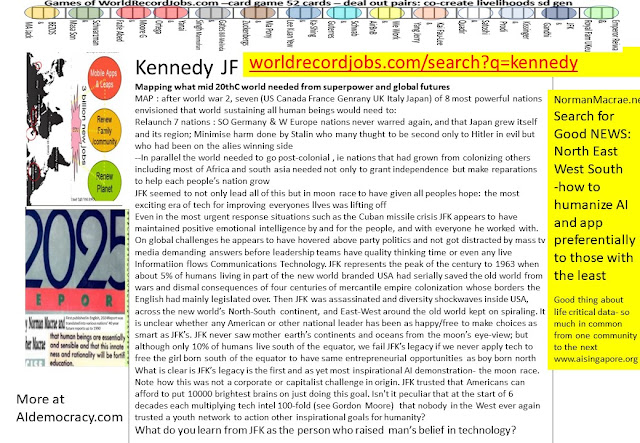 Posted by chris macrae at 10:14 AM No comments:

here is my attempt at what world would miss if Sheika Moza did not exist -all editing ideas hugely appreciated; in 10 days time i am at china's single most accessible summit for getting to 50 thinktank leaders on globalisation and humanising AI; think of it as the week before rehearsal of Education Girls Belt Road Beijing April 26- aka Girl AI Investment Banking GAIIB.com
i need a summary somewhere between twitter and max one page length of what world would miss without sheikha moza .though i had hoped brac and jack ma's biographer out of tsinghua university would have edited this - so far the opposite process has happened out of dhaka; meanwhile I know javeed has made great headway in india these last 6 months and returns to new york today;I will try and see him soon after my beijing trip

SHEIKHA MOZA epicentre of 3 multipliers of livelihoods of womens sustainability generation:
1.with 50 nations and UN hub education above all - innovation of edu systems for refugees
2.educations WISE origin of laureates for education- strangely nobel never did education- starting 2011 wise's worldwde judging panel with a bit of hedlp from Singapore’s lee kuan yew uiiversity awarded livelihood education laureates - inaugural bechmark education sir fazle abed brac- worlds largest girls livelihood education partnership network  - reaching quarter billion womens lives - thats before digital partners now including gates foundation mit and jack ma have accelerated brac’s bank/currency for billion poorest reach across hemispheres from its startup 1972  origins in disaster resilience and womens  grassroots community heath and nutrition network in the poorest 100 million person nation bangladesh –
3.Girls smart city: girls' university and education system at a superport in the middle of one of the hardest belt roads to map- next celebrations nov 2019 Qatar with 3000 delegates live and over 20000 active wise networkers including supercity branches in beijng madrid new York, ghana, tunis and paris
some other networks moza closely influences
UN sustainability goal eminent panel - see chinawise.org
women leaders of nations surrounded by conflicts - eg queen of jordan is arguably most heroic hub for k-12th grade education of girls both of her nation and at the huge refugee camps jordan hosts
investment funds of qatar foundation - the duality between the nations public higher education system and the world class partnership university campus of womens education city
qatar has a challenge to build a post oil well desert economy in the Arab Emirate region where up to 10 micronations’ ports are both collaborating and competing dominated by one macronation saudi arabia and surrounded by nations like syria iraq and iran which were once the centre of ancient civilisation trading routes but whose geographical landblocks and peoples are trapped by a world where technology is changing faster than human cultures can understand- part of moza's family have chosen highly visible modernity platforms including al jazeera media and partnering 2022 world cup football- it is still unclear whether these back from the future of global celebrity making will sustain a joyful postion for qatar in 2020s decade or trillion times moore tech than the moon race decade of 1960s. Whether or not qatars commercial investments are optimal there is no human reason we can find for not loving education above all

Regarding TO List and anyone who cares about girls livelihood edu

chris
there will be a hyperlinked version of this delegate listing at http://erworld.tv by Sunday it takes about 50 hours of searches to do all of these people justice unless you are chinese in which case you may notice china's first billanthropy the family from china's leading glass company (50 years on from my father's parody of how MBAs at UK pilkington glass were drowning itself in patents)

Posted by chris macrae at 7:57 AM No comments: