from chris.macrae@yahoo.co.uk
update aug 2021
hello- inspired by 1776 talk you gave a while back- both on need for usa supercity and role of superstars eg livesmatter foci. Could i talk with someone in your team? My father norman macrae of the economist was trusted at hi levels in japan. Many connections in tokyo now match your visions -they fit humanity's last chance as well as connections i have in glasgow. i am in bethesda +1 240 316 8157 www.japanthanks.com
to understand why ted leonsis (ref bold predictions) could just be the most valuable jobs creator our generation of americans will ever see you need to allow me a brief note on 20 years of studying nation branding- in 1989 pricewaterhouse coopers employed me as a brand  (intangibles valuation) consultant and their first question was what markets are under-branded- since i am a Cambridge MA in statistics who has collected large amounts of data on when is too much advertising used, preventing brands and markets to charter their purposeful realty,-ie their potential to serve humanity - i found the question tricky except that obviously nations  (as of 1989) are underbranded -

but a nation as a superport island by definition only needs to secure the future livelihoods of about 10 million people in a very compact area- how on earth does one apply lessons from singapore to a nation which is a continetal ,mass with 300 million people or even 1.5 billion people?

(well we now know economistamerica.com that you need to design bri.school for teachers of 5th grade otherwise you never map what future infarstructire your community most needs to thrive let alone to be connected with worldwide youth as the sustainability generation)

q1 what does ted leonsis mean by a 25 million person superckity region?> - and why does dc-baltimore need to be one of the first 3 us supercity regions- with new york and la-san diego other leonsis picks?
a supercity is a large region in ;population terms eg 25 million - a compact region in terms of travel- eg less than hour from door to door; its a region where every family thrives, and education loutsdie the classrooms (eg apprenticeships) us celebrated- and as a whole the region creates win-win trades both with its nation and across to sister super cities- it advances humanity's greatest needs whiih currently are represented by at least some if not all of the 17 sustainability goals 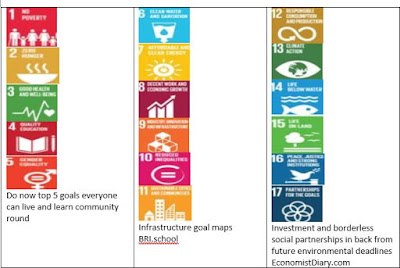 dc-baltimore needs to do a lot of work to itself- eg why cant all the international development experts tahat sit in dc prove their knowhow works in eg baltimore- ted's gift to the social mashup needed is he will ask his sporting superstars which ones can give back to something poorest communities need start power to come and reimagine;

the firsy time i heard ted speak was in the 1776 hub - one of the very few western hubs to be growing and growing (from arlington and dc to brooklyn and dubai ...) - it tuins out that part of 1776's success is its benefit from the relations permissions of digital americans hall of fame like steve case flounder of aol , and here comes a ted leonsis story - there was a time when jeff bezos was starting out and in looking for a partner in capital he went to ted who was at that time ceo of aol- quite what they did together I dont know other than staying friends and presumably opening up each other personal networks to each other

Does this mater?
well in 1994 jack ma first visited america on a translation project which took him to seatlle- he had never seen the www before - and so he spent the next 14 years proving to the chinese powers that be that china needed digital webs as much as they needed suercities and global villages- there is nowhere in the world that will ever remap a place in under 30 years with as much future win-win trade logic as china- which is how it should be for the world's largest population- anyone who has read adam smith advantages of nations will know that in 1776 he begged uk to design free trade win-win with usa -not to try to continue top colonise a place with so much more resources- adam failed and the uk went into exponential decline- of course it all depends on your belief in people- for 50 years i have been part of an alumni group who believes the 1000 times more tech connected world can multiply at least 10 times more wealth and health bi=ut only if this is shared so others can develop

related us world record jobs creatirs
u2 elon musk - rockstar with chinese media, he is given tough time by us business analysts- the thing is while he does research america needs most on green cars and supertrains, and batteries , and peaceful futures of space science- why should I care a damn about the financial press and all other fake news- nor should you if you want superplaces and thriving commmunities to blossom all acriss usa
u3 jeff bejos- - ofen i boo what other people admire about bejos and vice versa- back in scotland around 1995 we were trying to inspire the future of british marketing teachers and students to taje the the worldwideweb seriously and amazon at that time had to be theklead case - it was about the only dotcom of that era to work- but jack ma puts his finger on what upsets me about bejos- even he used ecommerce to support big entereprises not the the sme revolution in value chains that sustainability needs - so whats important is never ever to say that amazon and alibaba compete head for head because alibaba is on a belt road to everything smes can do with fintech , olympics-the way forrest gump would mediate it and much mire when you celebrate the greatest partnership i have ever heard of alibaba's ant finance's alipay and brac's bkash  - meanwhile yes for certain any region that could elect bezon on its superplace council; would be uniquely priviieged
Posted by chris macrae at 5:09 AM