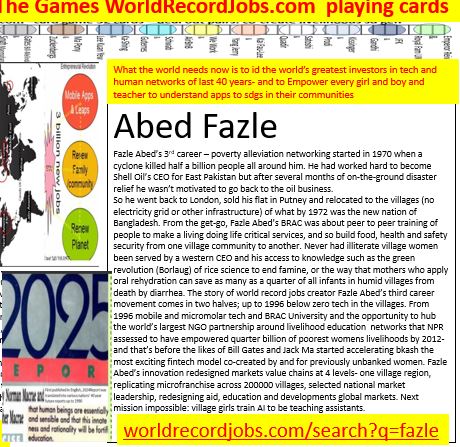 do you know which new economy miracle- started with one of the 10 most populous nations and next to zero industrial resources- from 1970 an educational network linked in training young men to rebuild villages flattened by cyclones ,training young village mothers to be their won health and food security services, alter building the largest non-government childrens schooling system, the worlds number 1 digital fintech for the poor, and now south asia's leading sdg university partnerships - to celebrate the founder of this join tencents co-founder hong kong 2 dec 2019 - for more ebrac.com - WRJ Fazle Abed who had to change 4 levels of economic value chains: 1 village , 200000 villages, national, global - 50 years of action learning networking - lets hope this who do education AI maximise the knowhow from this case which the whole sdg generation needs access to

Dr. Mushtaque Chowdhury is the Vice Chairperson and advisor to the Chairperson and founder of BRAC. He is also a professor of Population and Family Health at the Mailman School of Public Health of Columbia University, New York. During 2009-2012, he served as a senior advisor and acting Managing Director of the Rockefeller Foundation, based in Bangkok, Thailand. He also worked as a MacArthur/Bell Fellow at Harvard University.
Dr. Chowdhury is one of the founding members of the two civil society watchdogs on education and health called Bangladesh Education Watch and Bangladesh Health Watch respectively. He is on the board or committees for several organizations and initiatives, including the Advisory Board of the South Asia Centre at London School of Economics, Lead Group for Scaling Up Nutrition Movement at United Nations and is the current chair of the Asia-Pacific Action Alliance on Human Resources for Health (AAAH). He is also the President of the Dhaka University Statistics Department Alumni Association (DUSDAA). Dr. Chowdhury was a coordinator of the UN Millennium Task Force on Child Health and Maternal Health, set up by the former Secretary-General, Kofi Annan, along with Professor Allan Rosenfield, Dean of the Mailman School of Public Health of Columbia University, New York.
Dr. Mushtaque had previously received the ‘Innovator of the Year 2006’ award from the Marriott Business School of Brigham Young University in the USA, the PESON oration medal from the Perinatal Society of Nepal in 2008 and Outstanding Leadership Award from Dhaka University Statistics Department Alumni Association. He has a wide interest in development, particularly in the areas of education, public health, nutrition, poverty eradication and environment. Dr. Chowdhury has published several books and over 150 articles in peer-reviewed international journals.
A Ph.D. holder from the London School of Hygiene and Tropical Medicine, Dr. Mushtaque completed his MSc from the London School of Economics and a BA with Honors from the University of Dhaka.

I realized that my role is not just about collecting data, but it is to make the work of BRAC known to broader development community within and outside the country.