MOORES LAW - a japanese client stimulated american intel to invent programable chips - from 1965 gordon moore promised any alumni around him or silicon valley (branded from 1972  to unite 100 times moore explorers and to live up to stanfords (CA 5th governor's) founding purpose- health of all california kids) would get chance to apply 100 times more chip power every decade until intel of machines in the 2020s when a trillion times moore would probably result in humans turning over governance of real time data platforms streaming in from every gps on earth wherever a human smart device on eg a drone one was beaming in - moore's company intel has gravitated purpose of chip production relentlessly;

through the 2010s we have seen commercial platforms take over real time ops - eg amazon/bezos almost anything americans want to buy and delivered; facebook anything americans want to chat about- it is not at all clear when commerce data monopoly results in sustainability; many asian countries -being engineer led - lead in blending public and commercial ai algorithms -if the worlds under 30s are to be the sustainable generation these ai platforms issue must be made transparent by 2020s with eg priority on education, health, sme entrepreneurial finance- this is not a new need - neumann/moore and other exponential tech innovators alumni have debated it since 1984 at 2025report

related to moore is john von neumann; in 12 post war years before is death his work fathered computing in ever way- by 1961twin (AI) labs of von neumann alumni were planted at stanfford and mit boston - one network which debates where ae we in the 2020s is futureoflife.org probably the main stimulus for the un taking up responsibility of aifoor good or ai for sustainability - transparency note my father normamacrae.net who edited economics for good for 50 years used his first years of not writing weekly leaders to do biography of von neumann published in english and japanese 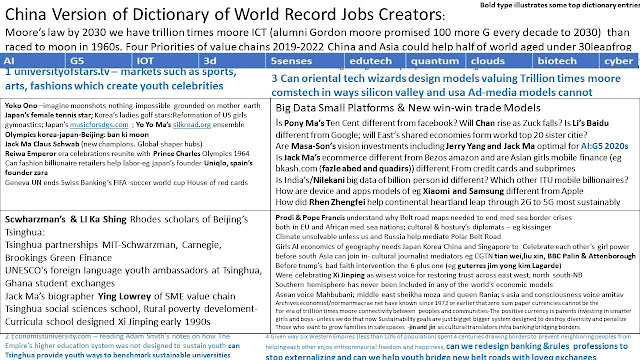 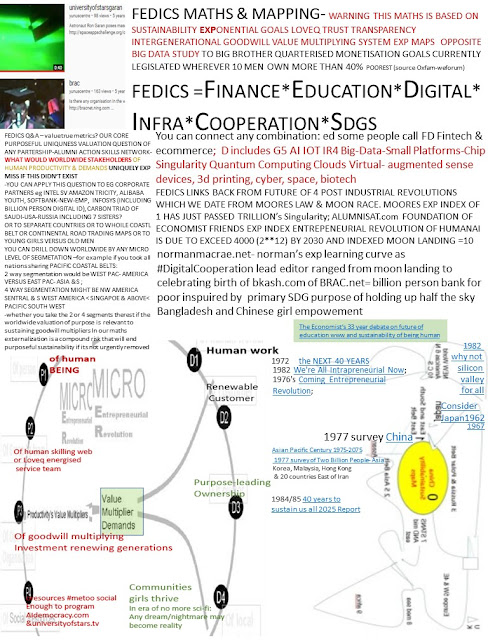 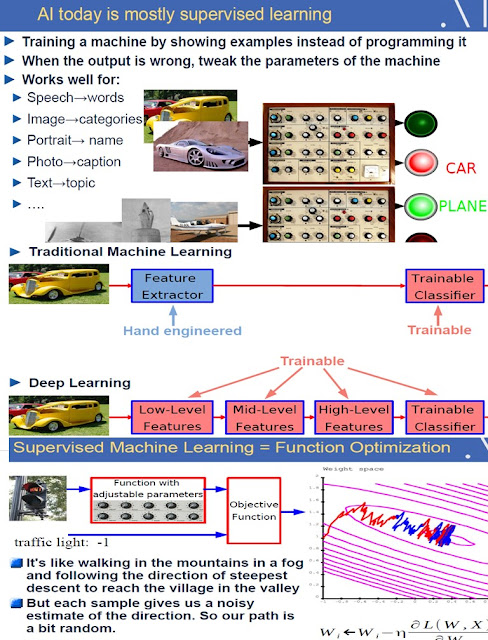 robots need always to be programmed to serve not to control- while so many nations politicians still set the wrong example of this http://aidemocracy.com is going to vary hugely from nation to nation 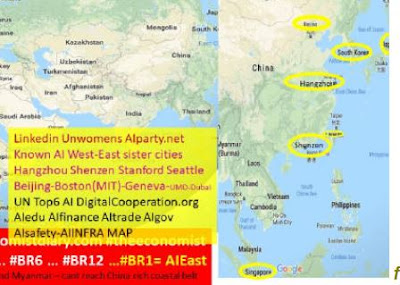 help improve why everybody should be excited by Moore - chris.macrae@yahoo.co.uk

From Wikipedia, the free encyclopedia
Jump to navigationJump to search

Moore was born in San Francisco, California, and grew up in nearby Pescadero; his father was the county sheriff. He attended Sequoia High School in Redwood City. Initially he went to San Jose State University.[9] After two years he transferred to the University of California, Berkeley, from which he received a B.S. degree in chemistry in 1950.[10]
In September 1950, Moore matriculated at the California Institute of Technology.[11] Moore received a Ph.D. degree[12] in chemistry and minor in physics from Caltech in 1954.[10][13] Moore conducted postdoctoral research at the Applied Physics Laboratory at Johns Hopkins University from 1953 to 1956.[10]

Moore met his wife, Betty Irene Whitaker, while attending San Jose State University.[11] Gordon and Betty were married September 9, 1950,[14] and left the next day to move to the California Institute of Technology. The couple has two sons, Kenneth and Steven.[15]

Main article: Traitorous eight
Moore joined MIT and Caltech alumnus William Shockley at the Shockley Semiconductor Laboratory division of Beckman Instruments, but left with the "traitorous eight", when Sherman Fairchild agreed to back them and created the influential Fairchild Semiconductor corporation.[16][17]

Main article: Moore's law
In 1965, Moore was working as the director of research and development (R&D) at Fairchild Semiconductor. He was asked by Electronics Magazine to predict what was going to happen in the semiconductor components industry over the next ten years. In an article published on April 19, 1965, Moore observed that the number of components (transistors, resistors, diodes or capacitors)[18] in a dense integrated circuit had doubled approximately every year, and speculated that it would continue to do so for at least the next ten years. In 1975, he revised the forecast rate to approximately every two years.[19]Carver Mead popularized the phrase "Moore's law." The prediction has become a target for miniaturization in the semiconductor industry, and has had widespread impact in many areas of technological change.[3][17]

Main article: Intel
In July 1968, Robert Noyce and Moore founded NM Electronics which later became Intel Corporation.[20][21] Moore served as executive vice president until 1975 when he became president. In April 1979, Moore became chairman and chief executive officer, holding that position until April 1987, when he became chairman. He was named chairman emeritus in 1997.[22] Under Noyce, Moore, and later Andrew Grove, Intel has pioneered new technologies in the areas of computer memory, integrated circuits and microprocessor design.[21]

In 2000 Betty and Gordon Moore established the Gordon and Betty Moore Foundation, with a gift worth about $5 billion. Through the Foundation, they initially targeted environmental conservation, science, and the San Francisco Bay Area.[23]
The foundation gives extensively in the area of environmental conservation, supporting major projects in the Andes-Amazon Basin and the San Francisco Bay area, among others.[24] Moore was a director of Conservation International for some years. In 2002, he and Conservation International senior vice president Claude Gascon received the Order of the Golden Ark from Prince Bernhard of Lippe-Biesterfeld for their outstanding contributions to nature conservation.[25]
Moore has been a member of Caltech's board of trustees since 1983, chairing it from 1993 to 2000, and is now a life trustee.[26][27][28] In 2001, Moore and his wife donated $600 million to Caltech, at the time the largest gift ever to an institution of higher education.[29] He said that he wants the gift to be used to keep Caltech at the forefront of research and technology.[23]
In December 2007, Moore and his wife donated $200 million to Caltech and the University of California for the construction of the Thirty Meter Telescope (TMT), expected to become the world's second largest optical telescope once it and the European Extremely Large Telescope are completed in the mid-2020s. The TMT will have a segmented mirror 30 meters across and be built on Mauna Kea in Hawaii. This mirror will be nearly three times the size of the current record holder, the Large Binocular Telescope.[30] The Moores, as individuals and through their foundation, have also, through a series of gifts and grants, given over $110 million to the University of California, Berkeley.[31]
In addition, through the Foundation, Betty Moore has created the Betty Irene Moore Nursing Initiative, targeting nursing care in the San Francisco Bay Area and Greater Sacramento.[23][32] In 2007, the foundation pledged $100 million over 11 years to establish a nursing school at the University of California, Davis.[31]
In 2009, the Moores received the Andrew Carnegie Medal of Philanthropy.[23][33]
Posted by chris macrae at 3:17 AM