2022's WRJ converge on HG Wells bon mots: civilisation is a race between education and catastrophe- for multiple reasons:

for at least 20 skills like tehse we aim alos to curate how to intervene if a kid's missing a skill peers have;

hello all from EconomistLearning.com; Its that time of year again for WRJ annual game of http://www.worldrecordjobs.com -more games welcome at www.sdgs.games and www.nftsdgs.com

HOW DO YOU PLAY WRJ PACK OF CARDS

which 52 people's knowhow might you most want to be aware of if you want both livelihoods and to be first sdg generation? To be transparent : our purpose is to web a survey of surveys- not one best answer for everyone. Moreover we choose cards from all 5 versions of humanity:

Inspired by Von Neumann's briefing on game theory and interaction of human and machine intel; a focus of The Game of WRJ is linking players who help community networking win-wins  -these are the main above zero-sum ways of human development whichever version of web your life on mother earth revolves round.

then my family's golden oldie (70 years learning curve) dad Norman met von neumann in princeton 1951; was told journalists most important scoop ,ask: what to do with 100 times more tech each decade to 2035- we are still nowhere near AIforgood that von neumann's family had hoped for best- i hope one antidote to lost awareness in AI for UN will be this year round competition http://www.sdgmetaverseprize.org  chris.macrae@yahoo.co.uk
Coming Soon Full 52 pack
plus some early detections of youth under 35 (its very gard to compare decades of enetrepreneurial gravity versus those who may be in their first decade but this is where we most need help in editing the game pack - because its todays under 35s that have everything to lose of win in preventing extinction; I am in my 70s though as a late starter my daughter is 25; if that makes me an angry old man who believes elders have subconsciously sold out most of mother nature and almost all of youth-then so be it -will you join us in valuing youth more than has ever been done in this 21st c to date?
Footnote 1 - 0-before the www began in 1990 , 00 =before electricity which in terms of blending with "tele" started 1965 in switzerland with birth of what was then called ITelegraphUnion but by 1945 had been rebranded ITelecomsUnion and digitally twinned out of Geneva with UN policy making hub out of New York. We love studying the ITU because all the world's tele corporations need to cooperate every year in future designing as nobody has ever wanted 2 telephone systems - whilst tele in GReek may mean "far off" ; and so businesses of breaking down distances between people (what the UN calls Global Connectivity) it could be defined as wehere above zero sum game theory multiplies most value for all human beings 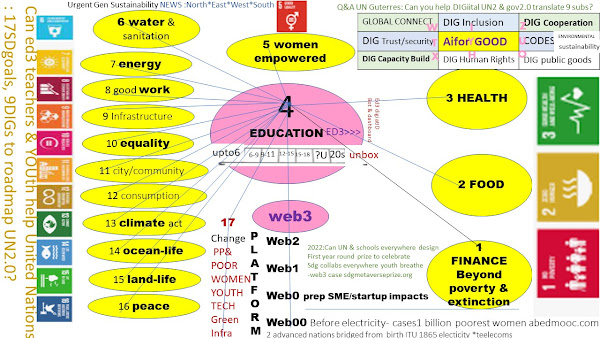 2 optional exerciseswhat does united nations mean- which of the world's capital cities most raidate your meaning travel across picture's relationships searching for solutions- where will sharing more love be needed as much as making money?
Posted by chris macrae at 9:24 AM