>“We are investing aggressively and broadly to facilitate the growth of the open metaverse,” said Siu, Animoca Brands’ executive chairman. “We’re in a bit of a hurry because we think the biggest threat isn’t regulation, but it is groups like Facebook or Tencent. This model of an open metaverse is very much in contradiction to the way that they’ve currently constructed their business,” he said. 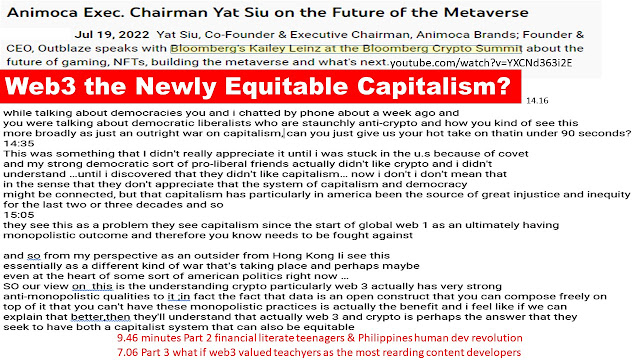 “Right now all the data you give to Facebook doesn’t belong to you. It belongs exclusively to Facebook. We believe in a shared network, giving digital property rights to all, and giving creators equity in the space.”

A decentralized data approach transfers ownership of digital assets such as virtual swords used by players in mobile games from a closed system that Siu likened to “feudal kingdoms.”

Openness gives the “serfs” or content creators the ability to own or trade their data across platforms rather than constrained within the walled garden models or closed ecosystems of Web2 leaders.

As the metaverse evolves, revenue models could be drawn away from advertising, subscriptions and in-app purchases of traditional models to sales of digital assets and transaction fees among participants or individual owners.

But how the revenue is allocated is a big point in ongoing debate, and tension, within the metaverse community, highlighted again this week when early adopters balked at ’ plans to take as much as 50% of the fees on virtual asset sales.

“Zuck gets that this change is coming,” Siu said. “Meta has made all its money from Web2 models.”

Animoca Brands, now a unicorn, has been preparing for a battle over control of Web3 virtual world data by luring more than $810 million in funding over the past two years from metaverse VC specialist Liberty City Ventures in New York, as well as high-profile names including Winkelvoss Capital, Soros Fund Management and Sequoia China. Singapore-based Temasek and China-connected Boyu Capital are adding $150 million this month, according to sources familiar with the funding, on top of nearly $360 million raised in January at a valuation over $5 billion.

Yat Siu, the founder and executive chairman of metaverse upstart Animoca Brands, has led over 200 investments and says of the battle for Web3, “We’re in a bit of a hurry.”
Animoca Brands

An early adopter of blockchain technologies after struggling through the dotcom era as a mobile game maker and facing financial troubles and regulatory pressure from dealing in cryptocurrencies, Animoca Brands is today bolting into the metaverse. It’s investing in acquisitions, licensing, and internal product development as well as more foundational technologies in cryptocurrencies and the latest craze, non-fungible tokens, a way to store value and authenticate ownership on a digital ledger, which saw trading volume spike to $25.8 billion last year, according to tracker DappRadar.

“We see Animoca Brands as a leader in adopting new technology that enables ownership in the metaverse of your own identity and transactions in a more trustworthy way,” said James Lang, managing director at Liberty City Ventures, which led the $360 million financing. “The metaverse economy is happening first in mobile games, and they are in the forefront of this evolution.”

“Web3 represents an incredible opportunity and a threat,” said early Uber investor and serial tech entrepreneur Shervin Pishevar. “The talent, energy and money that is going into it will create a perfect storm, a classic cycle of value creation and destruction,” he said. “There’s potential for companies to trip in this major transition as a new lattice of the Net develops with decentralized distribution and finance that allows users to be liberated from digital fiefdoms.”

Meta isn’t the only metaverse player that is being viewed skeptically. There are major critics of the VC community, including Block founder Jack Dorsey, who hinted in a Twitter exchange with Elon Musk late last year, that Web3 was already under the control of venture capital firm Andreessen Horowitz, an early Facebook backer and a Web3 advocate.

For companies such as Meta, there’s “not a guarantee they will succeed in this transition,” Pishekar said, adding that he believes the “open metaverse will prevail longer term over the closed metaverse in scale.” He likened this transformation to competing standards by Apple and Microsoft in development of the personal computer. “Nobody thought IBM would be out,” he said.

The Web 3 competition has increased as virtual currencies have become more common in the $176 billion video games business, a market of 3.2 billion gamers. The change is being led by new blockchain-based games with play-to-earn features and in-game tokens, such as those from Animoca Brands.

“What Yat and Animoca Brands are doing in blockchain games is trail-blazing,” said Kevin Chou, managing partner of Web3 startup incubator SuperLayer in San Francisco, which is backed by a16z VC Marc Andreesssen, Paris Hilton and several other celebrities. “I think Facebook will be disrupted,” added Chou, a founder of blockchain projects Forte and Rally, and mobile game Kabam, which he sold for $800 million in 2017.  “It’s a well-known trap. Take Blockbuster and Netflix as an example, where the business model for new tech won out.”

Animoca Brands has inked licensing and distribution deals with Atari, Formula 1 Racing, Warner Music Group and MGA Entertainment, and aligned through its deal-making with brands including Disney. It has developed 12 original games and made more than 200 investments. These forays include stakes in NFT marketplace OpenSea, blockchain game Axie Infinity and its Pokémon-like creatures, and Dapper Labs, with its CryptoKitties virtual felines and fantasy basketball game NBA Top Shot.

Animoca’s subsidiary Sandbox was popularized when rapper Snoop Dog set up a mansion on its virtual land but grew out of an acquisition. The firm has made 200 deals in all and completed 24 metaverse VC deals, making it one of the top VC players in the space over the past nine quarters, according to PitchBook.
Animoca Brands

Animoca subsidiary Sandbox, which it pivoted to blockchain after an acquisition, was popularized when rapper Snoop Dog set up a mansion on its virtual land and neighbors bought online plots for $450,000 in Sand in-game tokens. Its Crazy Kings mobile games franchise introduced a play-to-earn model that lets players compete and earn crypto tokens and it’s recently teamed up with the cultural icon, Bored Ape Yacht Club, to create a blockchain game. It’s inked 24 metaverse venture deals, out of a total 139 by 10 top investment firms over the past nine quarters, according to PitchBook.

“It’s a lucky, scrappy bunch from Hong Kong that’s not been afraid to take a bet on unproven business models and teams, and got in at the right time,” said Marc Jackson, founder of Los Angeles-based Seahorn Capital, an investment advisory for interactive entertainment and blockchain technology companies.

In the evolving metaverse economy, Yat Siu, the founder of a once little-known mobile gaming startup, is becoming known by a nickname: Mr. Metaverse. He’s pivoting his Hong Kong-based company Animoca Brands to help shape Web3 in a way that he says will offer an alternative to the tech giants — from Meta to Microsoft, Tencent and Snap — as consumers enter a new immersive market but are wary of a technology that could still be tightly controlled by the biggest corporations.

Since metaverse-like elements began popping up in video games in 2018, the Hong Kong-based upstart has scrambled to invest, acquire and build a next iteration of the internet.

Facebook’s name change to Meta is seen as “aspirational, and doesn’t mean at all that Facebook will win,” said Jackson.

In a founder’s letter last October announcing the company’s new chapter, Zuckerberg acknowledged that the metaverse will unlock a massively larger creative economy than the one constrained by today’s platforms and their policies. He noted that Meta’s role is to accelerate the development of fundamental technologies, social platforms and creative tools to bring the metaverse to life, and to weave these technologies through our social media apps. Meta declined to comment for this article.

Other big tech leaders are investing heavily, such as software giant , which recently acquired gaming giant Activision Blizzard, an early innovator in the metaverse with its role-playing games and digital goods worth real money. Sony recently invested a further $1 billion into Fortnite maker Epic Games, another major contender, on top of a previous $200 million last year. With cryptocurrencies currently disallowed in China, tech and entertainment conglomerate Tencent is positioning as a leader by investing in the U.S. in metaverse-like platforms  and Epic Games, and ownership of Riot Games, Jackson observed.

From computer prodigy to metaverse mogul

The imaginative leader behind Animoca Brands is a college drop-out and an Asian minority who was born and raised in Vienna as the only child of professional musicians. At an early age, he discovered his particular gift not in music alone but in computers (he found he could compose music by writing software on a computer and using a keyboard), which led to a job at Atari. After working in Japan and Taiwan for computer graphics company SGI and moving in 1996 to Hong Kong, where his father is from, he started an internet service provider at the age of 20, and supported himself by working at AT&T for a year.“I felt like I was selling fridges to Eskimos because everyone really didn’t know why they needed this. The experience in being really early taught me something about business grit,” Siu said.

In 1998, he launched Outblaze, a pioneer in cloud computing services, and steered it through the dotcom bubble. In 2009, he sold Outblaze’s messaging division to IBM and pivoted to consumer digital entertainment as co-founder of mobile game developer Appionics. Animoca Brands was spun off in 2014 to specialize in licensing of popular brands for games and original titles. The new entity, Animoca Brands, listed on the Australian Stock Exchange in 2015, but delisted in 2020, kicked off in part for regulatory pressure over use of crypto tokens.

Since then, the company has grown to 600 employees and a presence in 14 markets internationally, and, according to Siu, turned profitable in 2021. For the first nine months of 2021, Animoca Brands generated $141 million in bookings and income of $530 million that included gains on digital assets and investments. Reserves of the company’s digital assets and tokens were worth $15.9 billion in November 2021.

Overall, the metaverse market will hit $21.7 trillion by 2030, up from $1.2 trillion in 2022, predicted Ray Wang, founder of Silicon Valley-based Constellation Research, who pointed out that this universe takes in cryptocurrencies, interactive digital experiences, mixed realty technologies and artificial intelligence.

A report by Citi GPS pegs the metaverse at 5 billion users across large industry sectors and multiple devices by 2030. But Citi GPS also noted several dark sides such as regulatory uncertainty, money laundering, counterfeit NFTs and trading scams – not to mention the high volatility of most cryptocurrencies.

“We see the metaverse as a natural evolution, not a revolution. The bigger firms are taking the first plunge. These bigger players have the advantage and ability to invest, and have the R&D, budget, level of trust, plus data privacy in place,” said George Korizis, a partner at PwC.

Dave Droga, CEO of Accenture Interactive, said scale, credibility, and deep pockets can help to capture the advantage, but he added, “given the speed and influence of some startups, some surprising players will emerge.”

Global venture capital in blockchain startups increased seven times in 2021 to $25.2 billion, according to CB Insights, as investments in NFTs soared by 130 times to reach $4.8 billion.

“The crypto and blockchain space is exciting, fast-moving and interesting,” said Alyssa Tsai, founder and CEO of Panony, a Hong Kong-based incubator, angel investor and advisor for crypto and blockchain projects that has co-invested with Animoca Brands. “It’s something for our own generation, like the previous generation had the dotcom.”

Posted by chris macrae at 7:45 AM No comments: