who will be the sustainability's most valuable couple at the 75th UNGA sept  2020
Posted by chris macrae at 5:02 AM No comments:

- more Economistarts.com green children, wavy gravy, grateful dead/EFF, women imagine yoko ono, musicforsdgs.com, singforhope, silk road ensemble, detroit youth choir got talent, south african youth choirs got talent,  GARETH MALONE- bbc reality tv show the choir, universityofstars.tv
=============================
i have studied disfunctional markets as Cambidge MA Stats since 1976- none has been more terrifyingly disfunctional than aid whenever ruled by fundraisers, ad agents or political supremos instead of grassroots practictioners - until guterres not aware of major branch of  UN in NY led by a practioner since the wonderful japmes grant of UNICEY -without james grant s outh asian women might never have invented microfimace let alone commuit health servants ending death of infants by diarrheas and death of moethrs and children by the 10 simplest every day diseases tropical villagers face -it is probably a real;y bad idea to design the western world's wealthiest city with mad advenu a 3 minutes walk from missions to the UN- jets hope no other supercity of the sustainability generation makes this mistake- chris.macrae@yahoo.co.uk founder genre wordclassbrands 1989 washington dc fake media cris hotline +1 240 316 8157
Posted by chris macrae at 6:58 AM No comments:

2020 will the election year climax in a true turning point in america? will UN NY and other climate-solution hosts be free to discuss solutions teachers and students can apply? for the last few years we have had to go to geneva to hear climate solutions the UN likes best .. EconomistDiary.com notably the first climate summit after the US election is Glasgow Cop26- hopefully the bbc and david attenborough will be out to bat with their latest billion person mobile movements valuing small island nations; Rotterdam's first annual after action debriefing of GCA.org https://gca.org/search/watercan be exciting rehearsal for Glasgow but don't expect the politicians to let common sense get a look in as ear;y as october

Among the UN's 17 goals - if 8 billion humans are to thrive as tech changes every human possibility- 14 life below water , 15 life on earth provide the most direct opportunity to model how nature runs the globe's systems, and so the disaster man will cause if our use of tech to go global fails to value natures system maps. Staring with the moon race decade of the 1960s, we have known that the 3 generations living 1960-2030 would be mediating change on a scale that either competes or cooperates with nature- more at 5G 4G 3G 2G 1G 0G. -see also WRJ Gordon Moore

The UN Geneva event pictured took place about a week after Hurricane Dorian had destroyed lives on many thousands on the bahamas. In the UN language about 50 of 200 nations are SIDS (Small Island Nations) -while small on land they face huge ocean estates- if we destroy their fish, their coral, heat up their waters their future is bleak. At the beginning of the week the president of St Lucia clarified how global financiers after 9/11 made things worse for sids- because a few had money laundered , a move had been made to exclude many sids from the electronic world of finance. He also explained how the elite global economists eg IMF had misvalued sids- when you require them to grow their economy but provide no funding for infrastructure upgrades caused by the rest of the worlds warming- you design a global economy aimed at destroying peoples of sids.
BLUE PLANET
While all these financial arguments have not moved the policy of the G7 nations much in last 20 years, it turns out that the nature broadcasting of David Attenborugh has. Since the beginning of UK tv Attenborough has told the stories of the natural world. In his recent Blue Planet II series, a billion viewers including a quarter from china on mobiles saw the stories of fish being killed off by plastic waste and the death of coral. The reduce plastic challenge appears to be uniting the peoples of the world faster than even trump can deny. Thank you bbc;  thank you David Attenborough- may the UN finally represent the peoples not just the top powers of nations- that at least is my understanding of what the circular economy will need to map- whats yours? chris.macrae@yahoo.co.uk

2019 UNGA Guide.  All of the above was in part a rehearsal for UNGA next week in New York- the first annual event under Guterres leadership themed around sustainability goals in general and climate action urgency in particular -UNGA

Asia can Lead Global Transformation towards Low Carbon and Resilience

Posted by chris macrae at 5:38 AM No comments:

old universities were set up for to standardise expert silos not to innovate, certainly not to celebrate youth's entrepreneurial revolutions needed locally as man raced global
- see discussion on this started by economist adam smith! 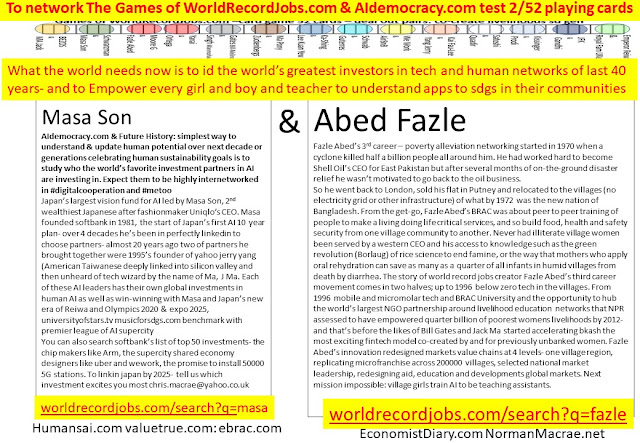 Posted by chris macrae at 1:04 PM No comments: 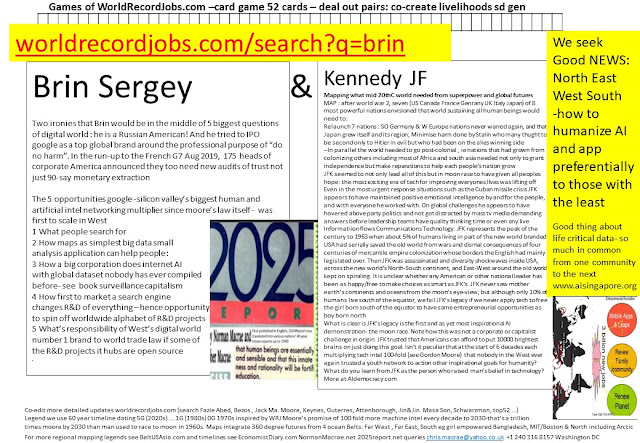