Changing communications, and what makes people distant, bossy etc
Telecommunications are now recognised as the third of the three great transport revolutions that have, in swift succession, transformed society in the past two hundred years. First, were the railways; second the automobile; and third, telecommunications-attached-to-the-computer, which was bound to be the most far-reaching because in telecommunications, once the infrastructure is installed, the cost of use does not depend greatly on distance. So by the early years of the twenty-first century brainworkers - which in rich countries already meant most workers - no longer need to live near their work.
All three revolutions were opposed by the ruling establishments of their time, and therefore emerged fastest where government was weak. All three brought great new freedoms to the common man, but the railway and motor-car ages temporarily made access to capital the most important source of economic power. As most men and women did not like being bossed about by capitalists who could become more powerful because they were born stinking rich, they voted to give greater economic power to governments during the railway and motor-car ages. This was economically inefficient, and also made tyrannies more likely and more terrible. The information revolution was fortunately the exact opposite of the steam engine's industrial revolution and of Henry Ford's mass production automobile revolution in this respect. The steam engine and mass production has made start-up costs for the individual entrepreneur larger and larger, so that in both the steam and automobile ages to quote Bell Canada's Gordon Thompson in the early 1970s, there was 'no way an ordinary citizen could walk into a modern complex factory and use its facilities to construct something useful for himself'. But, as Thompson forecast, the databases of the next decades were places into which every part-time enthusiast could tele-commute. In all jobs connected with the use of information, start-up costs for the individual entrepreneur in 1984-2024 have grown smaller and smaller. It was 'never thus', said Thompson, 'with power shovels and punch presses'.
In consequence, in the TC age, the most important economic resource is no longer ownership of or access to capital, but has become the ability to use readily available knowledge intelligently and entrepreneurially.
Changing national politics
Posted by chris macrae at 11:30 PM No comments:

walking roung tsinghua became my favorite journey in life
there i met ying lowrey author of jack ma's alibaba way -and she told me to ask youth to start celebrating the return of ma full time to education- between age 11 and 30 jack ma had been his city's main peer to peer trainer of english speaking youth- hangzhou had become the first designated tourist city as china opened up- with no reliable human maps, guiding tourists in english was also the way for chiense youth to map geographies across the fast chang world of moore's law 0g to 5g decades

Posted by chris macrae at 10:30 PM No comments:

my family led by dad Norman started diaries at the economist of compound consequences of some peoples accessing 100 times more tech per decade 1935-2035 after v neumann briefing porinceton 1951; i joined in research with our joint 1984 book 2025report.com- though my professions is researching media bad or good? my passionate belief (life pirpose even) since work at UK computer based learning project 1973: is only education revolution can sustain 21st C humanity - whether you agree with my belief -if you have alternative nominations for 3 most inspiring educators -- i'm at chris.macrae@yahoo.co.uk

Education systems designed round standardized exams achieve the exact opposite of Gandhi’s purpose. Csikszentmihalyi  has studied more geniuses than anyone else. His finding they maximise the percent of their lifetime spent at the experiential edge of their most unique competences. Hold this idea, we will have the chance to revisit it with most World Record Jobs Creators

a job that upgrades a community's ;local capaity - its health, its safety, its ability to thrive attract tourists and loical to arts and fashions .. and/or a local microfranchise which has been designed so that all or most of value stays wioth the local producres- all sorts of organis and sliw food frachsies are possible (by slow we meean the cooking was slow); the distribution may well be mobile fast- imagione for example of cloise to every american school there was a canhteen serving nutritious non-0obese lunches in daty time but offering the community take in serviecs at night

when you travel around the world you find usa is often the odd one out in not celevrating local ffod- additionally diversity of food leads bto transcultual arts and other celebrations - maximisibg this is one of the gtest new livelihood movemnts youth can lead wherever belt roasd parterships newly bridge old borders
Posted by chris macrae at 7:49 AM No comments: 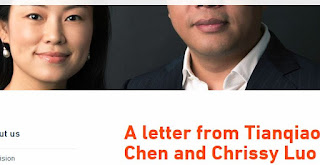 hello most of my life as a corpus christi college Cambridge MA in statistics has been spent studying behavioral responses to both mass media and online media...there are various issues i know quite a lot about but am not sure if they fit your inquiries

- since mobilisation of worldwide web i would say that china has been doing much better with this than we in the west, as have a few applications using mobiles in urgent situations such as bangladesh village girls have pioneered with mit networks still inspired by berners lee

when it comes to online behavior i was involved in early 1970s trial which showed how deeply human beings can get caught up in interactive media; so our hope had always been that educators would use this to beat off those whose advertising skills are the opposite

edutech  (and artificial intelligence eg to be a teachers assistant) remains a field that the west has spent so much less on than we had hoped ; these days at education summits those who give me hope are mainly chinese


the united nations general assembly in 2018 under direction by Guterres and some of his eminent committee will be inviting a of of the best of edutech to explain what really deep apps they can bring to the world -eg girls empowerment solution helping to end deep poverty; we have searched out a few chinese students at columbia university etc hoping to intern in prepping this summit, and some of the have been trained in massive real community building thanks to my friend who developed open space technology in 1984  -- we are also admirers of the movement building a million jobs for youth with autism - in a way it offers training designed to celebrate tiose who have a surfeit of mind power Welcome to Specialisterne - Specialisterne but not necessarily understanding of how they are perceived in society