1.1M views
1995 was the first time that both an American and Chinese entrepreneur saw a huge digital leap at the same time. Because linguist Jack Ma's first  trip to USA was seattle 1995 he became one of the world's 2 biggest market makers. He was bringing the joy of exploring the world with him as China's coming out generation- Bezos rational for choosing books to start ecommerce was about demonstrating he could operate around the market with the largest number of lines. see pbs frontline   2020

STORY OF ECOMMERCE
The stories of what the world's 2 greatest marketmakers valued  similarly and differently are essential for understanding what will happen in 2020s, and probably our species sustainability! Americans are 5% of the world's population  and it would be absurd to think that commerce needs are similar everywhere let alone parts of rural asia and africa yet to see electricity grids. And where a society which has never had access leaps ahead with a combination of mobile and solar-  sharing life critical knowledge often comes first.   Moreover  a generation of americans grew up with you've got mail and personal  computing networks digital to most chinese means you've got chat and mobile.

can you help us improve  on these listings

some  markets   are most life-critica if our borderless networking  age is to  share mother earths risks  such as climate viruses -anything that   joseph nye calls a coalition economy not a  GDP economy that exaggerates false  competition.   Most  cities  need  to learn with each other in going green or making supercities for humans instead of cars, and joyful community and artistic participation

Jack Ma has investors who are co-strategists eg Masa Son and Jerry Yang and this has  given him the opportunity to explore value chains of service/knowhow markets that product ecommerce cannot reach and to partner millennials  dream organisations like the UN in these  most life critical markets -    bezos  certainly has some mentors he has cultivated for over 25 years but its  not clear he will be a  coalition leader if indeed any american can be while fake laws are lobbied through the dismal space that DC has become in terms of valuing youth. Quite how the epicentre of trusting youth to moon race in 1961 now devalues youth every decade - wars of 2000s, subprime legacy for 2010s, the hatred   2020 western political lobbies specialise in is way beyond my ability to help americans or brusselians to brainstorm.For those interested in the economic challenge of integrating the 7th            wondrous economy - that is a wholly different game of diversity to play and search with mapmakers of worldrecordjobs 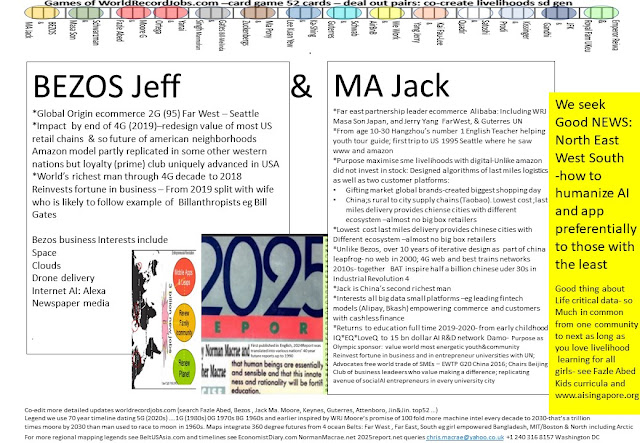