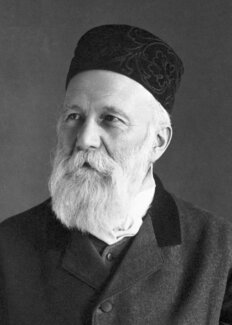 Jean Henry Dunant‘s life (May 8, 1828-October 30, 1910) is a study in contrasts. He was born into a wealthy home but died in a hospice; in middle age he juxtaposed great fame with total obscurity, and success in business with bankruptcy; in old age he was virtually exiled from the Genevan society of which he had once been an ornament and died in a lonely room, leaving a bitter testament. His passionate humanitarianism was the one constant in his life, and the Red Cross his living monument.

The Geneva household into which Henry Dunant was born was religious, humanitarian, and civic-minded. In the first part of his life Dunant engaged quite seriously in religious activities and for a while in full-time work as a representative of the Young Men’s Christian Association, traveling in France, Belgium, and Holland.

When he was twenty-six, Dunant entered the business world as a representative of the Compagnie genevoise des Colonies de Sétif in North Africa and Sicily. In 1858 he published his first book, Notice sur la Régence de Tunis [An Account of the Regency in Tunis], made up for the most part of travel observations but containing a remarkable chapter, a long one, which he published separately in 1863, entitled L’Esclavage chez les musulmans et aux États-Unis d’Amérique [Slavery among the Mohammedans and in the United States of America].

Having served his commercial apprenticeship, Dunant devised a daring financial scheme, making himself president of the Financial and Industrial Company of Mons-Gémila Mills in Algeria (eventually capitalized at 100,000,000 francs) to exploit a large tract of land. Needing water rights, he resolved to take his plea directly to Emperor Napoleon III. Undeterred by the fact that Napoleon was in the field directing the French armies who, with the Italians, were striving to drive the Austrians out of Italy, Dunant made his way to Napoleon’s headquarters near the northern Italian town of Solferino. He arrived there in time to witness, and to participate in the aftermath of, one of the bloodiest battles of the nineteenth century. His awareness and conscience honed, he published in 1862 a small book Un Souvenir de Solférino [A Memory of Solferino], destined to make him famous.

A Memory has three themes. The first is that of the battle itself. The second depicts the battlefield after the fighting – its «chaotic disorder, despair unspeakable, and misery of every kind» – and tells the main story of the effort to care for the wounded in the small town of Castiglione. The third theme is a plan. The nations of the world should form relief societies to provide care for the wartime wounded; each society should be sponsored by a governing board composed of the nation’s leading figures, should appeal to everyone to volunteer, should train these volunteers to aid the wounded on the battlefield and to care for them later until they recovered. On February 7, 1863, the Société genevoise d’utilité publique [Geneva Society for Public Welfare] appointed a committee of five, including Dunant, to examine the possibility of putting this plan into action. With its call for an international conference, this committee, in effect, founded the Red Cross. Dunant, pouring his money and time into the cause, traveled over most of Europe obtaining promises from governments to send representatives. The conference, held from October 26 to 29, with thirty-nine delegates from sixteen nations attending, approved some sweeping resolutions and laid the groundwork for a gathering of plenipotentiaries. On August 22, 1864, twelve nations signed an international treaty, commonly known as the Geneva Convention, agreeing to guarantee neutrality to sanitary personnel, to expedite supplies for their use, and to adopt a special identifying emblem – in virtually all instances a red cross on a field of white1.

Dunant had transformed a personal idea into an international treaty. But his work was not finished. He approved the efforts to extend the scope of the Red Cross to cover naval personnel in wartime, and in peacetime to alleviate the hardships caused by natural catastrophes. In 1866 he wrote a brochure called the Universal and International Society for the Revival of the Orient, setting forth a plan to create a neutral colony in Palestine. In 1867 he produced a plan for a publishing venture called an «International and Universal Library» to be composed of the great masterpieces of all time. In 1872 he convened a conference to establish the «Alliance universelle de l’ordre et de la civilisation» which was to consider the need for an international convention on the handling of prisoners of war and for the settling of international disputes by courts of arbitration rather than by war.

The eight years from 1867 to 1875 proved to be a sharp contrast to those of 1859-1867. In 1867 Dunant was bankrupt. The water rights had not been granted, the company had been mismanaged in North Africa, and Dunant himself had been concentrating his attention on humanitarian pursuits, not on business ventures. After the disaster, which involved many of his Geneva friends, Dunant was no longer welcome in Genevan society. Within a few years he was literally living at the level of the beggar. There were times, he says2, when he dined on a crust of bread, blackened his coat with ink, whitened his collar with chalk, slept out of doors.

For the next twenty years, from 1875 to 1895, Dunant disappeared into solitude. After brief stays in various places, he settled down in Heiden, a small Swiss village. Here a village teacher named Wilhelm Sonderegger found him in 1890 and informed the world that Dunant was alive, but the world took little note. Because he was ill, Dunant was moved in 1892 to the hospice at Heiden. And here, in Room 12, he spent the remaining eighteen years of his life. Not, however, as an unknown. After 1895 when he was once more rediscovered, the world heaped prizes and awards upon him.

Despite the prizes and the honors, Dunant did not move from Room 12. Upon his death, there was no funeral ceremony, no mourners, no cortege. In accordance with his wishes he was carried to his grave «like a dog»3.

Dunant had not spent any of the prize monies he had received. He bequeathed some legacies to those who had cared for him in the village hospital, endowed a «free bed» that was to be available to the sick among the poorest people in the village, and left the remainder to philanthropic enterprises in Norway and Switzerland.

3. Taken from a letter written by Dunant and published by René Sonderegger; quoted by Gigon in The Epic of the Red Cross, p. 147.

This autobiography/biography was written at the time of the award and first published in the book series Les Prix Nobel. It was later edited and republished in Nobel Lectures. To cite this document, always state the source as shown above.

Photo from the Nobel Foundation archive.

Residence at the time of the award: Switzerland

Founder of the Red Cross

In 1859, a battle was raging at the town of Solferino in Northern Italy. There the Swiss businessman Henry Dunant saw thousands of Italian, French and Austrian soldiers killing and maiming each other. On his own initiative, he organized aid work. Later he wrote the book A Memory of Solferino, which contained a plan: all countries should form associations to help the sick and wounded on the battlefield - whichever side they belonged to.

The result was the establishment of the International Committee of the Red Cross in 1863, and the adoption of the Geneva Convention in the following year. It laid down that all wounded soldiers in a land war should be treated as friends. Medical personnel would be protected by the red cross in a white field.

For Dunant personally, financial difficulties led to poverty and loss of social respect. But the organization he had created grew, and the underlying ideas won gradual acceptance. It pleased the ageing Dunant that the Norwegian Nobel Committee rewarded his life's work with the Nobel Peace Prize.

Copyright © The Norwegian Nobel Institute
Back to top
Posted by chris macrae at 9:18 AM