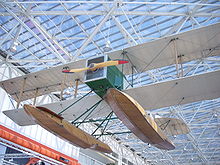 In 1916, Boeing went into business with George Conrad Westervelt as "B & W" and founded the Pacific Aero Products Co. The company's first plane was the Boeing Model 1 (B & W Seaplane). When America entered the First World War on April 8, 1917, a little more than a month later, Boeing changed the name from Pacific Aero Products Co. to Boeing Airplane Company[1] and obtained orders from the U.S. Navy for 50 planes. At the end of the war, Boeing began to concentrate on commercial aircraft. He secured contracts to supply airmail service, and built an airmail operation and later passenger service that evolved into United Airlines.
Posted by chris macrae at 7:22 AM