Diaspora Scot James Wilson started up a lot of unfinished business founding The Economist 1843
At that time, there was no SDG 2 (which only arrived at united nations in 2015 -poetic justice was served with the first action summit led by Ireland's PM) - policy of london and  most members of parliament was to starve regional neighbors Irish and Scots- see corn laws - although his royal society newsletter did repeal the corn laws; troubles/terror networks out of ireland had been planted for the next 150 years; and london went on to thin scots - instead of starving to death we became an 80% diapora nation taking engineering knowhow with us - alumni networks smith/watt 1760
wilson persuaded queen victoria to give him the charter for a bank to develop financial services by and for indian people;arriving in calutta 1860 wilson died  of diarheawithin 9 months of landing - it took 110 yrars more before women started networking a bank to build rural asins and end dirrhea as killer disease - see abedmooc.com
son in law walrter bagehot, economists 2nd editor helped queen victoria change direction of english constitution from the worlds worst slave trader and colonised to commonwealth; but practically speaking britain's eaast indian company went on to close down china for 110 years (the chinese wisely refused to accept opium as a wrld trade currency), and of course the 7 white empires were the root cause of 2 world wars and the nuclear games mischief that is still burdening us in 2021 even as natute bowls her first extinction ball covid 2020s
compare birth of 2 media organisations one and a half century's apart: wilson versus bloomberg
Bloomberg News was founded by Michael Bloomberg and Matthew Winkler in 1990 to deliver financial news reporting to Bloomberg Terminal subscribers. The agency was established in 1990 with a team of six people. Winkler was first editor-in-chief.
1843: The Economist was founded by diaspora scot, small enterprise ceo and Parliamentary Member of the House of Commons James wilson- wilson had
goals of process -sack vested interest MPs and
goals of moral sentiments: end laws that starve the Irish ;
wilson was arguably Britain's smartest statistician (in any event he located the economist near somerset house where statisticians met royal society's creative peoples)
whilst wilson use of the economist as a royal society newsletter turned the tide against the corn laws, this didnt happen in time to prevent Irish propagating terror networks against london for next 150 years
wilson's biggest mediation caused his early death; while queen victoria was still a happy youngish spirit he sold her the joyous idea of changing English constitution towards commonwealth instead of empire slavemaking ; so she gave him a bank charter, and commanded he go redesign india's economy for its people; 1860 wilson landed in calcutta only to die of diarrhea within 9 months; it took another 110 years before a cure for diarrhea mixing water salt, sugar in right proportions was found; this was a solution that began raining the productivity of a billion asian mothers starting with bangladesh and tropical continental china
imagine if youth who wanted to network sdgs were paid forward to linkin their own world tour of universities and hubs - where would they meetup

Shell oil began life as the starbucks of late 1700s except tea was the drink that made world trade hum even for non-alcololic quakers who built other great anglo dutch institutions eg unilever
soon these btanched into various royal societies while shell became the empires carbon energy company
by 1843 diaspora scot james wilson sick of scotlands capital being treated like any other colonial city came down to london - his 3-fold plan: become an MP to sack majority of MPs who by now were representing vested lobbies not the people, start economics true media The Economist- friend queen victoria- map how to transform from queen of slave trades to commonwealth- part 1 stop starvation in ireland - cornlaws; part 2 start chartered bank to prepare india for independence- sadly before james has seved his first year in calcutta he died of diarrhea- over 100 years later girl empowerment netwtorks discovered the cure of oral rehydration - the most economic health service solution ever networked- the second connection that took 100 years to linin was crop and other rice scieines of borlaug- mexicans and chinese village women celebrated borlaug as the first knowledge networker to save a billion persons lives; the second was sir fazle abed, the 3rd was whomever you believe freed people on the chinese mainland- thesearee the great economic miracles if economics is the subject adam smith james wilson and keynes intended- but as keynes warned in last chapter of money interest and employment - you can hire an economist to expoentially lock in one single goal - eg make the 10 richest me own more than half of all women if that's what you nation chooses to call democracy
more on wilson's favorite community hub - somerset house 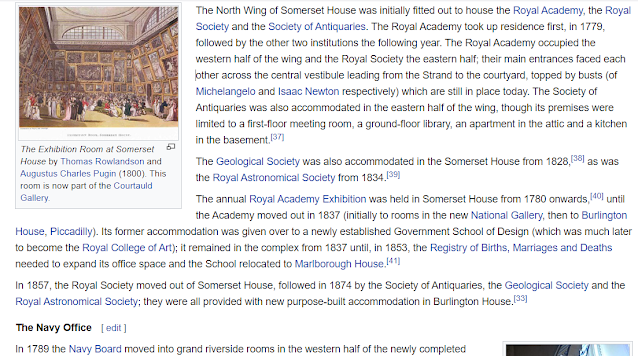